Floating Dragon is a casino slot developed by Reel Kingdom and released in 2021. Despite the fact that it was recently released, Floating Dragon already is a favorite game for many players. The RTP of the game is 96.71%, which is very high but still is not overly generous. Floating dragon is a high volatility slot game, which means that you may wait long until you win, but once you do, the prize will be very serious.  There is no jackpot in the game but, given the circumstances, we can say that Floating Dragon has much to offer.

The maximum bet of the game is 250-pound starling, while the minimum is 0.1-pound starling, which makes Floating Dragon interesting and available for players with any budget. The game has 3 rows and 5 reels, just like most of the other video slots. Floating Dragon has 10 different pay lines, which come in all shapes from straight lines to triangles. The paytable of the game is very generous even for the high volatility slot. In this Floating Dragon Review, we will talk about every aspect, which makes this game extra special and very enjoyable. 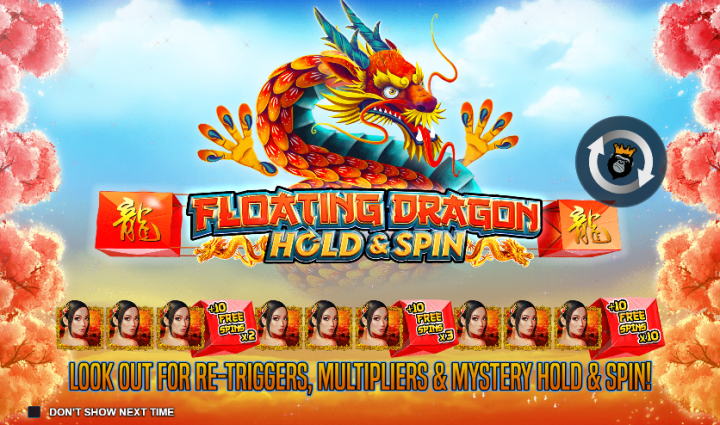 One of the main reasons, which makes Floating Dragon outstanding is its theme and visual. Once you start playing, you will find yourself in China, in the middle of the ceremony. Reels, Symbols, the background – everything carries an Asian flavor in it. There is a game name written in red letters with the Chinese hieroglyphs on both sides and golden dragons below at the top of the reels. Reels are separated from each other with bamboos that instantly remind you of China.

The background is covered in blossoming Sakura trees, which also is a reminder of eastern Asia. The symbols of the game, which are kites also takes us to China, in particular, Weifang, which is the birthplace of kites and has one of the most colorful and beautiful festivals of all time – the Weifang International Kite Festival. The wild card of Floating Dragon is a pretty Chinese princess, which is the symbol of Asian beauty and the scatter card is the dragon itself.

The visual would not be this satisfying if there were no high-quality graphics and contrasting colors. The Audio of the game is also matching the theme and helps to make the visual effect even stronger. The whole game is accompanied by Chinese music which is very relaxing. If you are not a big fan of the sound effects, you can simply mute the game by clicking the sound button on the left side of your screen. 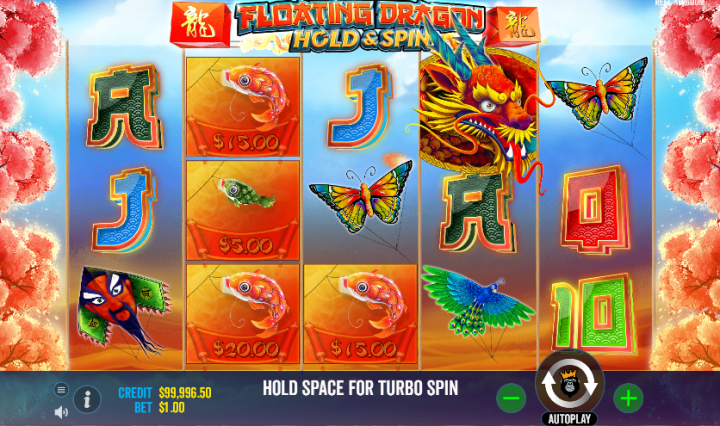 Floating Dragon Rules – How Do You Play It?

Just like other video slots, the rules are pretty simple for Floating Dragon too, but if you are a complete beginner and need detailed descriptions, you can use this review as your Floating dragon guide. In order to play the game, you just need to spin the reels using the spinning button on the right side of the screen. If you are too busy to do that, you can use an autoplay button which is below the spinning button and lets you choose the number of auto spins from ten to one thousand.

The setting menu on the left side of the screen affects the way how the game is played. Once you open it you will see the regulator of the bet, which is very important for the game process. You can also activate or deactivate Quick spins, which reduces the total spin time and lets you play faster, Battery saver, which reduces the animation speed and saves the battery, Ambient music, Sound effects, and an intro screen. Floating Dragon comes with ten regular symbols and three unique cards. Five of the regular symbols are the cards from 10 to Ace and the other five symbols are the kites in different colors and shapes.

Then, there is a dragon card which is a scatter symbol, the golden symbol which takes the random value from 1x to 20x, and a wild card that can replace any symbol in winning combinations, except the scatter dragon and golden coin symbol. The scatter dragon and wild card may appear anywhere on the reels, but the golden money symbol only appears in the middle reel. All symbols pay from left to right on the selected pay line and all wins are multiplied by the bet per line. 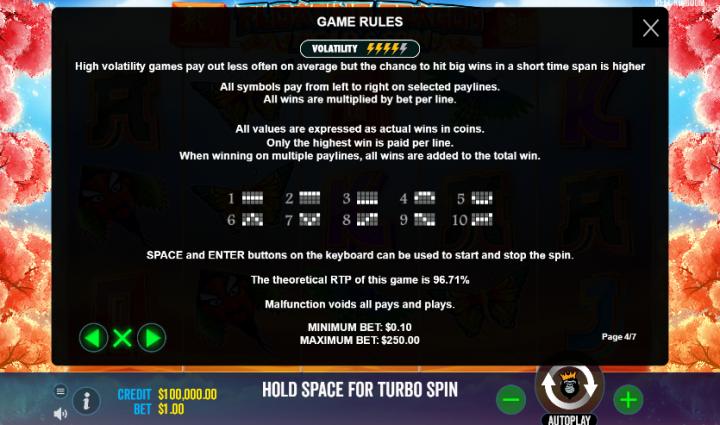 Floating Dragon Paytable – How Much Can You Win?

Floating Dragon is a special slot that is equally enjoyable when you bet and when you play floating dragon free. It will not be surprising if I say that, as most of the high volatility slots, Floating Dragon has a very generous paytable. The lower symbols, which are the cards from ten to Ace, pay equally when you get them in a winning line: If you get three of the same symbols in the right combination they offer you 0.5 coins, 2.5 if you get four, and 10 coins if you are lucky enough to get five of the same symbol in a pay line. 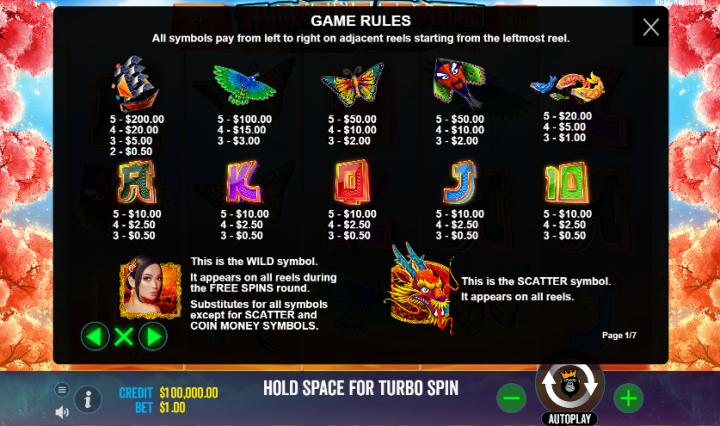 Besides the impressive visual and audio, Floating Dragons have features that make the game even more enjoyable and entertaining. The golden money symbol, which basically is a multiplier, may appear in the middle reel and it takes the random value from 1x to 20x. Also, the diamond multiplier is available, but only in the bonus round of the game. On some occasions, the fish kite symbols also act as a special feature. The fish take a random money value at every spin.

One of the most interesting features of the game is Floating Dragon free spins round, which is won in case you get 3 or more scatter dragon symbols. three dragons will get you ten free spins, four scatter symbols will get you fifteen free spins, and if you are lucky enough to get five dragons, it will give you 20 free spins.

The free spin feature can not be retriggered more than three times, but it still is more than enough. When there are no more wild symbols on the screen, fish money symbols may appear randomly in any position and replace the current symbols. The maximum win of the free spin round is 5000x and if you win that much before the round ends, sadly, the feature stops immediately, but the win is awarded and all remaining free spins are forfeited. 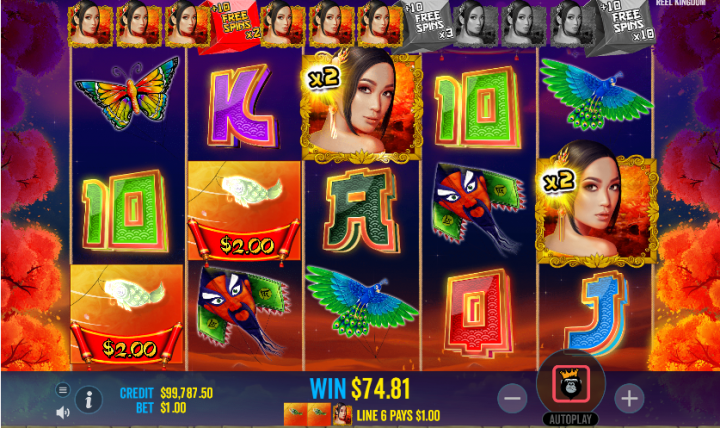 You may think that scatter dragons are the only way to win the free spins, but there is another way that goes to the Floating Dragon bonus round. The golden money symbol, which appears only in the middle reel is the key to the bonus. If you are lucky enough to get three golden money symbols, a congratulation card will appear on the screen, the background and Sakura trees will paint in red shades, the flames will be put on the logo of the game, and the Hold & Spin round will begin.

This feature is played using special reels which are more profitable than the ordinary ones. Once the round is started all the symbols will fade away except the three golden money symbols in the middle reel. The values of all money symbols in the middle reel are added to the total win of the round. The bonus starts with three respins and all money symbols which heat after the respin resets the number of respins back to three and the values of each golden money symbol are also added to the total win. During the Hold & Spin round, there is a possibility to receive an incredible prize using the Diamond Money symbol. The diamond money symbol may appear on any reel except the middle one.

Whenever you get the Diamond Money symbol, it can take any value from 100x to 9443x total bet. If the whole round passes by without winning anything, three more respins are awarded, which means that a win of a minimum 20x total bet is guaranteed. The round is ended once there are no more respins left. When the Hold & Spin bonus round is over the total value collected so far is awarded. 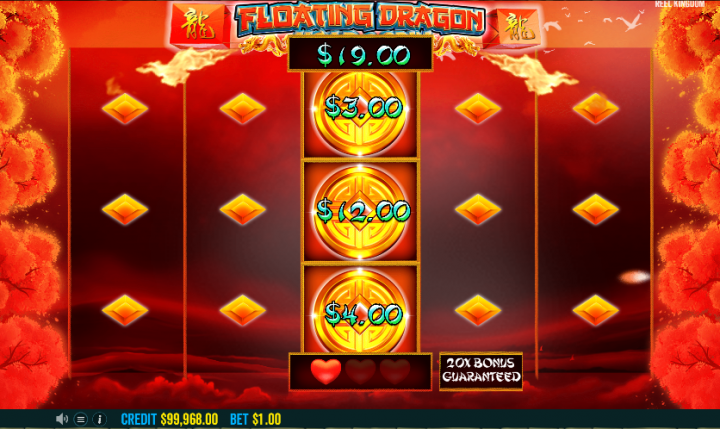 FAQ on Floating Dragon – What Should We Know Before We Start Playing?

Is Floating Dragon easy to play?

Despite the fact that Floating Dragon has more than one unique feature and a row of the rules for bonus rounds, The game is still pretty easy to play. Just like other video slots, all you need to do is simply spin the reels.

Is there any bonus round in Floating Dragon?

Yes, there is, and actually, more than one. the first one is a free spin bonus, but there is nothing regular about the round except the name. You can win various amounts of free spins using the scatter dragon card and the round itself has even more to offer. The second kind of bonus is Hold & Spin bonus which can be won using the Golden Money symbol. You get 3 respins once you get the middle reel full of these symbols. Like the free spins bonus more respins and serious prizes can be won in the round.

How much can you win in Floating Dragon?

The RTP of the game is 96.71% which means that you are able to win 96.71% of the total bet at some point. As the high volatility slot, Floating Dragon has a very generous paytable and juicy bonus rounds to make your chances even higher.

Can I play Floating Dragon free?

It is completely possible if you use the websites which offer their clients crypto services. There are many websites nowadays, which offer this possibility, for instance, Avalon78, 7Bit Casino, or PlayAmo.